Here is my bio but if you want to know the story of how I became The Sleep Lady and why I decided to create the Gentle Sleep Coach Training and Certification Program then read the story below my bio.

KIM WEST is a mother of two and a Licensed Clinical Social Worker who has been a practicing child and family therapist for more than nineteen years. Known as The Sleep Lady® by her clients, over the past fifteen years she has helped thousands of tired parents all over the world learn to listen to their intuition, recognize their child’s important cues and behaviors, and gently create changes that promote and preserve his or her healthy sleep habits.

Kim West has appeared on the Dr. Phil, Today Show, NBC Nightly News, Good Morning America, TLC’s Bringing Home Baby and CNN, and has been written about in a number of publications including The Wall Street Journal, Associated Press, Baby Talk, Parenting, The Baltimore Sun, USA Today, The Telegraph, The Irish Independent and the Washington Post. West hosts the sleep section of The Newborn Channel, played in maternity wards in hospitals across the country.

Kim has spoken to numerous parenting groups across the country about the importance of children’s sleep and how to gently teach your child to go to sleep and sleep through the night.

Kim is the author of “THE SLEEP LADY’S GOOD NIGHT, SLEEP TIGHT: Gentle Proven Solutions to Help Your Child Sleep Well and Wake Up Happy” with co-author Joanne Kenen. Published by Vanguard Press in January 2005. This book was been newly updated and expanded in 2010. She is also the author of “52 Sleep Secrets for Babies” (2008) and “The Good Night, Sleep Tight WORKBOOK” (2010). Both published by Easton Studio Press.

Kim West received her master’s degree in Clinical Social Work from Simmons College in Boston, Massachusetts. She lives with her family in Annapolis, Maryland.

The Story of How I Became “The Sleep Lady” 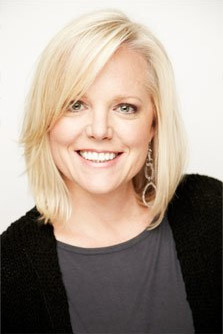 I remember the EXACT moment I decided that I was going to follow MY intuition on how to care, raise, feed, sleep my newborn.
It sounds so obvious now, but only a parent would know what I mean by this.
I was still going to listen to all the solicited and unsolicited advice (in case I missed a golden nugget), but I would FILTER it as I see fit for my child and my beliefs. I knew enough about child development and attachment theory to raise an emotionally healthy child (or least good enough since no one is perfect).
I was smart enough, intuitive enough and loving enough. I was good enough.

The Moment When It All Began

The moment it all began occurred in the wee hours of the night when Carleigh was a newborn and had mild jaundice
She was a “bird feeder” and breast feeding was a big learning curve for the two of us. I was given well intended advice from a lactation consultant to wake Carleigh during the night every hour-and-a-half to feed her (there’s actually a much longer story here, but I’m trying to keep this short).

Anyway, I would try to wake her and feed her only to have her wake for a moment and then fall right back asleep. And I would be awake for hours.

That was my moment . . . all alone at 2am, crying, with a sleeping baby in my arms who I couldn’t force to eat and a sleeping cat curled up by my side.

I woke the next morning from my “nap” with a new directive.

I went against the social norm at the time . . . and put Carleigh on a flexible, gentle eating and sleeping routine during the day.

I put her down awake at bedtime and only fed her when she woke up at night . . . no more waking her up to try and feed her.

I tweaked, I experimented, I still wore her a lot and breast fed her but I was following my heart.

Carleigh was growing, happy and sleeping thru the night early on. I was blossoming in my role as mother.

I had the nay sayers who would say “Oh that’s a stage…it will change” or “Oh you were lucky” and I would have my moments of doubt.

I remember a nurse telling me “That’s not luck Kim, its you.” And I put that thought in my back pocket.

I started to help my family and then my friends when they had babies.

Somewhere in between this and working as a therapist, I had another baby: Gretchen.

She had horrible reflux and was and still is one of those alert kids! She put me in my place and helped me be a better Sleep Lady.

After much encouragement from family I added this specialty to my family therapy practice.

At that time there were no “Baby and Toddler Sleep Coaches or Parenting Coaches” . . .

There was a book out there by Richard Ferber . . . a doctor in Boston (you know, the guy who they use his name as a verb; he was the first one to stick his neck out there, then came the other “big dogs” Weissbluth, and Mindell).

I tried to find someone to mentor me or supervise me or even to brainstorm with me.

But to no avail.

There were no peers in my field to speak of or who were accessible.

I couldn’t find anyone who was in the trenches with sleepless parents like me.

There were no training programs . . .
. . . and sleep consulting or coaching wasn’t considered a “field”. So I researched and read and talked to my friends and did more research and reading.
I taught myself, I built on my knowledge of child development and attachment theory, I honed my skills and defined my method.

With each family, I grew and learned and modified.

I wasn’t sure how to structure my business or how to get more clients.

I knew I wanted families to be happy and well rested, to be empowered and most of all to know they had choices when it came to sleep coaching. That it wasn’t just “cry-it-out” or do nothing.

My passion (and flat-out obsession at times) for the topic and for helping others (I am a therapist after all) and the rewards of sleeping parents is what kept me going.

Back when I began doing all of this (all alone, crying at 2AM in the morning) I never would have dreamed that . . .
• I would have a trademarked name, “The Sleep Lady” and create a gentle method for sleep coaching that has a recognizable name “The Sleep Lady Shuffle” or SLS.
• That my work would be featured on Dr Phil
• That I would be interviewed by Sonja Gupta on CNN or be on the Today Show or GMA
• Or that I would have celebrity clients (who have sleepless children, big hearts and worries like everyone else)
• Or be offered stays in beautiful summer homes in Maine or Hawaii as a gift for transforming families (btw I have never taken any one up on that)

But In Addition To Being Humbled By The Impact I’ve had, I’ve Also Been Blessed to Have A Very Gratifying Lifestyle (My Friends Call It Amazing . . . I Just Enjoy Having Flexibility).

For example, I get to work FROM HOME on the phone with families all over the world, and know that I’m making real and meaningful connections with people (and that those connections and my advice can create dramatic changes for the better).

I never would have dreamed that I’d get to make my own schedule (so I can be more available for my children, especially after school now that they are teens).

And I never would have imagined that I would NOT have to do much traditional marketing . . . I just have to be excellent at what I did and that parents would tell all their friends and pediatricians and it would spread like wildfire (first as a handful of referrals, then hundreds of them . . . then thousands).

The demand for well trained, accessible sleep coaches far outweighs the supply (like a thousand times over).
And with each passing day, I’m finding over and over again that the need for gentle sleep coaching is so much bigger than I could ever fill in a thousand life times.

Consider These Numbers:
• There are babies being born every day all over the world (all which eat, SLEEP and unfortunately poop)
• And 1 in 4 of them will have some sort of sleep problem
• Our doctors get little training in sleep yet are asked to help parents every day and
• There is NO person or institution educating or training people to be sleep coaches
• There is a “void being filled by entrepreneurs with no credentials” as one of my posts says

So I felt compelled to step up to the plate. As one commenter in a past blog post wrote “it would be a disservice to NOT do this.”

I decided it was time for a formal sleep consultant training and certification program AND the formation of an International Association for Child Sleep Consultants (so that best practices and curriculums can be established).

It’s time for the sleep coaching field to become professionalized . . .
. . . and I’m on a mission to empower families and give them choices in how they sleep coach.
In my heart of hearts, I want excellent sleep advice and coaching to be readily available for all parents everywhere. I’ve wanted this for a long long time. It was way overdue.

But the huge task of reaching the millions that need to be reached CAN NOT be done alone.

There are too many sleepless babies and tired parents all over the world.

There are sleepless babies everywhere and not enough well-trained sleep coaches who actually teach not just theory.

But down-in-the-trenches proven (over an over again) techniques that actually work.

And so The Gentle Sleep Coach Training and Certification Program was born!